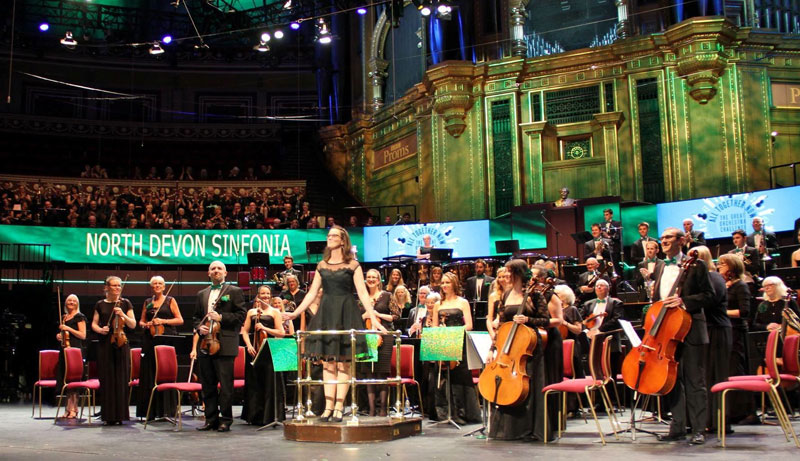 The North Devon Sinfonia Orchestra, winner of BBC Television’s The Great Orchestra Challenge, has had its hopes of performing in the World Orchestra Festival in South Korea this September dealt a blow as its application for a grant from The Arts Council has been turned down.

The orchestra is now asking businesses and the public to support its efforts as a cultural ambassador for North Devon on the world stage.

While expenses will be met once in Korea, the £32,000 cost of getting the 55-strong orchestra and their instruments half way across the world falls to the NDS itself. This disappointment comes on top of the £2,500 lost when the North Devon theatres closed in January.

Musical director Emma Kent said: “Thanks to our loyal supporters and some marvellous local businesses we have already managed to raise over £12,000 but we were hoping that the Arts Council would support us as we will very much be representing the UK in this World Festival.

“However, we are not throwing in the baton yet and are determined to go, so the members are now meeting as much of the costs as possible themselves, but I estimate we will still be about £10,000 short. I just hope that music lovers all over the country, not just in Devon, will come to our aid and pledge support through our crowd-funding page and make a donation. To give you an idea about the costs involved, flights are about £800 per player and it costs £590 to ship one cello as it requires its own flight ticket. Altogether, we will be sending 40 players.

“We are hoping to do an informal public ‘Rehearsal for Seoul’ where the public could enjoy an evening listening to us putting the final polish to our repertoire while also contributing to the travel costs. One of the challenges is to find a large enough venue to attract a substantial audience, but we are working on it and will announce the date and place later.”

Anxious to justify its new title of the UK’s ‘most inspirational’ orchestra, North Devon Sinfonia Orchestra has embarked upon a quest to promote amateur music throughout North Devon. A new North Devon Youth Sinfonia gets under way later this year and it is planning to launch its own North Devon Classical Music Festival next spring. This event will bring students and adult amateur musicians together with national and international professional players in a series of workshops, concerts, master-classes and recitals held over three days. It expects its trip to Seoul to provide the catalyst to help launch its own festival, providing invaluable knowledge and experience as well as raising NDS’ artistic profile nationally and internationally.

• Business Action is the North Devon-based business magazine and news service.If you have news or ideas for an interesting business article, please contact editor Robert Zarywacz now at .

My Tweets
%d bloggers like this:
This web site uses cookies to work effectively for you. If you continue to use this site, you agree that you are happy with this. We do not collect your personal data from this web site.OKPrivacy policy